Queen Alcestis was the fairest among the daughters of king Pelias of Iolcus and Anaxibia. She had so many suitors, that her father decided to marry her to the first one who would manage to yoke two wild beasts to a chariot.

Admetus asked for Apollo's help, and the god agreed, because Admetus had always treated him well when he was just a herdsman. And so he came in front of Pelias with the chariot drawn by a wild boar and a lion and could marry the girl. Their life together was happy and they often entertained guests - Admetus was well-known for his hospitality.

Pelias, Alcestis' father, was hungry for power. He banished his brothers (including Pheres, Admetus' father) so that he could get the throne. He sent his nephew Jason in search of the Golden Fleece, hoping that he would die along the way. Jason managed to come back safely, helped by Medea, but Pelias refused to give up his throne. The enchantress decided to take revenge on him, and so she tricked his daughters: she cut up a ram and boiled it, and after a while a young live ram jumped out of the pot. All the daughters of king Pelias decided to rejuvenate their father in the same way. The only one who refused to take part in this was Alcestis. she tried to stop her sisters, but in vain.

They cut him up and threw him into the pot, waiting for Medea to bring him back to life, but younger. The enchantress just didn't keep her promise and didn't revive him. This was another reason for the ancient Greeks to praise Alcestis - even if her father had been a bad person, who betrayed many persons from his own family, it was still a sin for his children to kill him.

The best known episode in queen Alcestis' life was... her death. Apollo had made the Moirai drunk, and they agreed to let Admetus live longer, if he could find someone to take his place. The only one who accepted was his loving wife.

After bidding farewell to her children and praying for their fate, she left together with Thanatos. In Plato's Symposium, the gods were so impressed by her heroism and her noble sacrifice, that they decided to reward her and sent her back from Hades to the world of the living.

In Euripides' play by the same name, Heracles came to visit king Admetus right after his wife's death. As soon as he heard about that, he went to her tomb and he wrestled and defeated Death, and so he managed to restore queen Alcestis back to life.

For the summary of Euripides' play with the same name, click here. 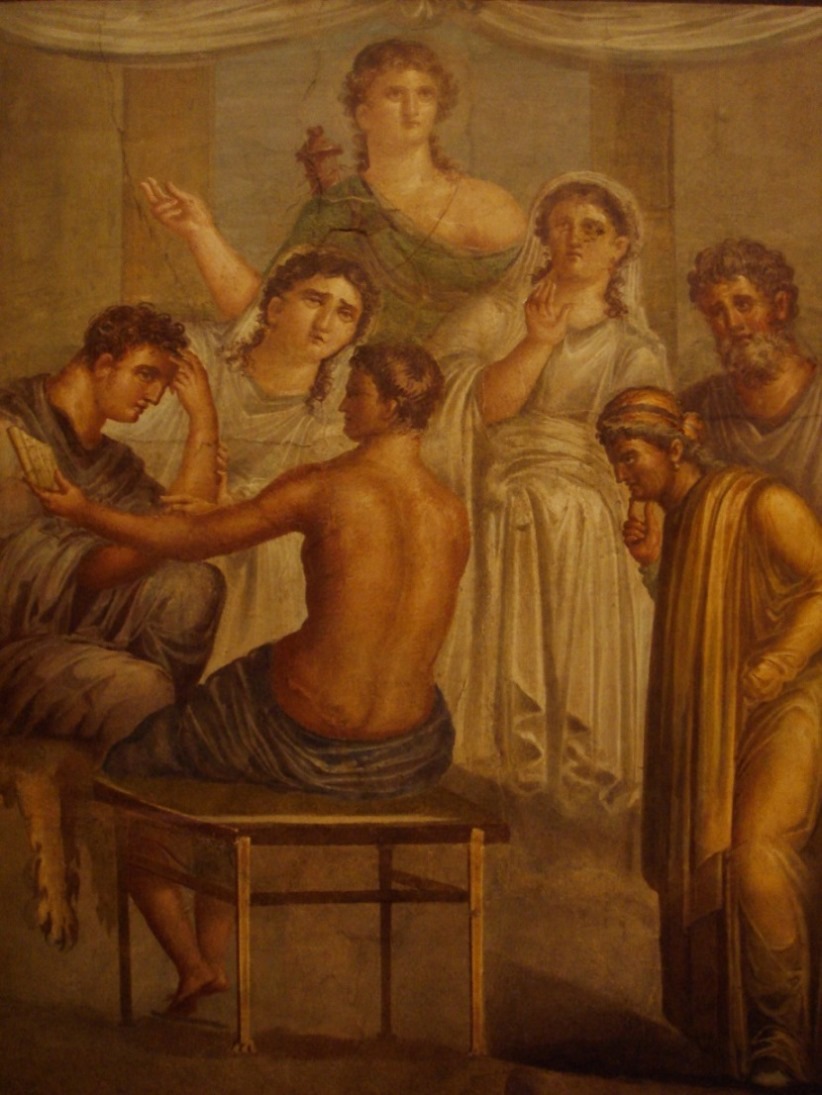 from the House of the Tragic Poet, Pompeii, Italy