The Greek god Morpheus was the one of the sons of Hypnos, the Greek god of sleep. His mission was to take the shape of other people and appear in the kings' and rulers' dreams.

He is represented as a winged deity, who could quickly travel all over the world, because he was also a messenger of the gods: whenever they wanted to send a message to someone, they would send the Greek god Morpheus, who took the shape of a trusted person and also imitated that person's manner of speaking.

We still use his name today, in the expression "in the arms of Morpheus", which means "to be asleep".

Even though there are no details about him being married or not, he was considered to be married to Iris, the personification of the rainbow.

In the following paitning, by the baron Pierre-Narcisse Guérin, you can see both of them (Morpheus is, of course, asleep, and there is a rainbow behind Iris). 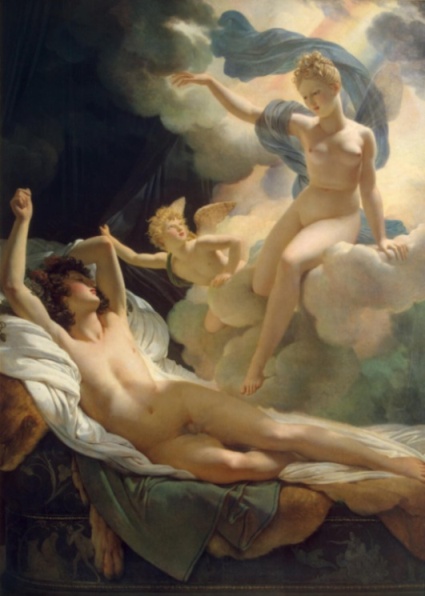 The following painting is by Giulio Carpioni, about Iris visiting Hypnos in the cave of Sleep, bidding him to send Morpheus to Halcyone. The story goes like this: Halcyone was married to Ceyx, who went on a trip and drowned. His wife kept imploring the gods for his wellbeing. In the end, Hera could no longer suffer her prayers, because she knew Ceyx was already dead, so she sent Iris to Hypnos, the god of sleep, asking him to send Morpheus to Halcyone. Morpheus took the form of Ceyx and appeared in her dream, naked and dripping, telling her about his death.


Here is a fresco in which Morpheus, god of dreams, is represented sleeping:


Not exactly what you were looking for? Keep on searching!