Caerus Greek god of opportunity (also called Kairos) was in fact a spirit. He personified the favourable moment which comes and passes by quickly. In Greek there were two words for "time": "chronos", the linear, cronological time, and "kairos", a moment in an indeterminate period when something special can happen. The Roman equivalent was Tempus or Occasio.

Pausanias said that Ion of Chios made Caerus/Kairos, in a hymn dedicated to the god, "the youngest son of Zeus". He was represented as a young man with a tuft of hair on his forehead, while the back oh his head was shaved. He had wings on his feet and he was moving very fast. The tuft of hair meant that you can grasp opportunity/luck as it approaches you, but if you miss it, you can do nothing after it passed (because Caerus Greek god od opportunity/luck had no hair on the back of his head). Aesop said that not even Zeus could catch him, after he passed, and that he was a symbol of "the brief moment in which things are possible".

In front of the stadium at Olympia there were two altars, one dedicated to Hermes and the other one to Caerus.

Callistratus described a statue of the Caerus Greek god, made by Lysippos, which seemed alive. The god was represented as a young man who had winged feet and was standing on tiptoe on a sphere. He had tresses on his forehead, but the back of the head had very short hair. The statue seemed to be really blushing and the god seemed to float in the air.

Someone explained to him the meaning of the statue: the wings on his feet meant swiftness, beauty is always opportune and the locks of hair on his forehead meant that one should seize opportunity as it approaches, because, after the moment for action passes, you can't recover it.

But I think the explanation Callistratus mentions is in fact the epigram by Posidippus, sculpted on the statue:

"Who was the sculptor and where did he come from? From Sikyon.
What was his name? Lysippus.
And who are you? The Time that controls all things.
Why do you stand on tip-toe? I'm running.
Why do you have a pair of wings on your feet? I fly with the wind.
Why do you have a razor in your right hand? As a reminder for people that I am sharper than any sharp edge.
Why do you have a tuft of hair over your face? So he who meets me can take me by the hair.
And why, in heaven's name, is the back of your head bald? Because after I pass by, on my winged feet, nobody can catch me any more, even if they wish they could.
Why has the artist sculpted you? For your sake, stranger, and he put me on the porch so as you might learn something."

This statue was the model for the various representations of Kairos in ancient times and also in the Middle Ages. A bas-relief made of marble from Trogir (Croatia) probably represented this statue.

In this painting by Francesco Salviati you can see the Caerus Greek god of opportunity (in this case, the wings are on his shoulders). 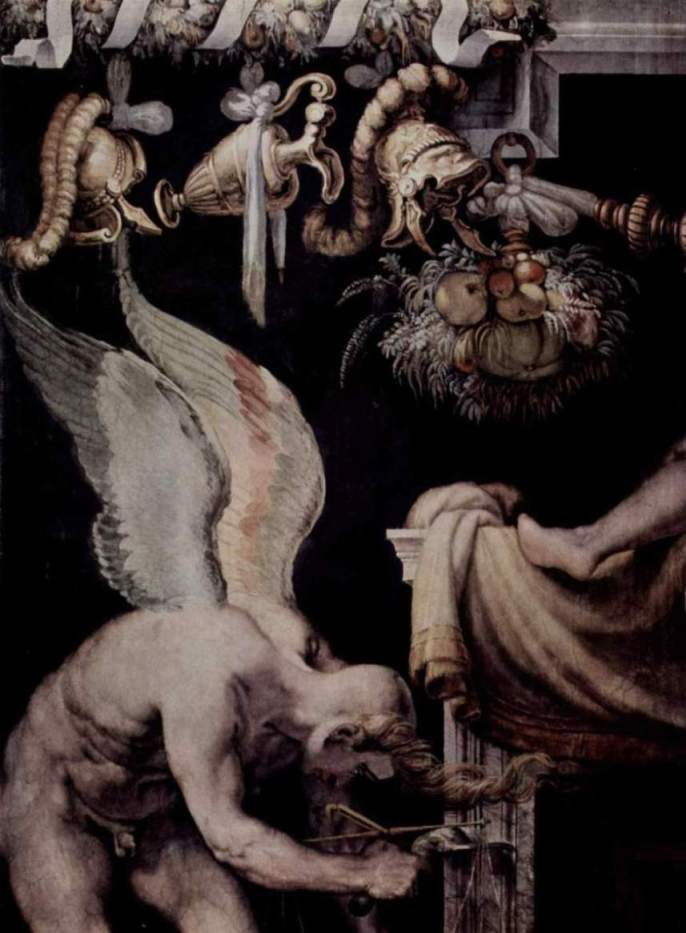